As per Business Insider (BI) report, 381 million connected cars will be on the road by 2020, up from 36 million in 2015. Furthermore, BI Intelligence forecasts that connected cars will generate $8.1 trillion between 2015 and 2020. These figures indicate that IoT and related digitalization technologies will lead to a fundamental shift in the world of mobility.

According to a 2016 Gartner report, the production of new automobiles equipped with data connectivity, either through a built-in communications module or by a tether to a mobile device, is forecast to reach 12.4 million in 2016 and increase to 61 million in 2020. 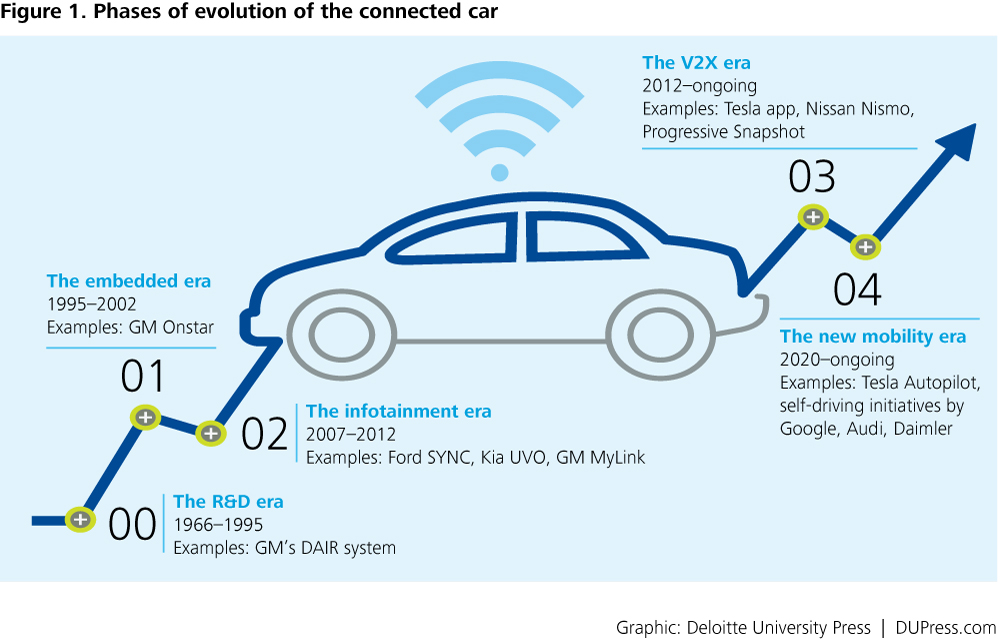 We have already seen that IoT is making a substantial impact on healthcare, agriculture, retail and it has already started influencing the way we handle our automobiles, buy them and even drive

Indeed, the auto industry is on the brink of a revolution, and the driving force is the suite of technologies known as the Internet of Things (IoT)

The ultimate expression of a car that drives itself is being developed through IoT. Such a car would be 10% hardware and 90% software, and it would be connected to everything – connection is made from vehicle to vehicle, vehicle to cloud and vehicle to drive. Cars would be connected without the direct involvement of the driver, through the help of software that is still in the process of being perfected.

Cars and automobiles at large will record a huge volume of streaming data- Big Data which needs to be stored and analyzed in real time. This data will not just be beneficial for the auto manufacturers (to understand how their cars are used) but also by insurance companies (driving behavior will correlate with premium) but also for Governments, Municipal authorities and specifical authorities in smart cities.

The future may allow us to witness the following :

Author adminPosted on October 9, 2019
People want data as soon as possible on everything related to them now-a-days. This trend is widespread in almost all spheres of life be...
Read More

Author adminPosted on March 17, 2020
Technology in 2019 is moving with the speed of light. Immense breakthroughs in the field of deep learning and machine learning have allowed machines...
Read More

How India can Leverage Blockchain and AI to Boost Renewable Energy

Author adminPosted on January 3, 2019
The Indian Government has set itself the ambitious objective of generating 175 GW of renewable energy by 2022 and 275 GW by 2027. India...
Read More

Author AuthorPosted on November 16, 2020
Many technologies such as the Internet Of Things and smart applications play a key role in the development of societies and the economies and...
Read More