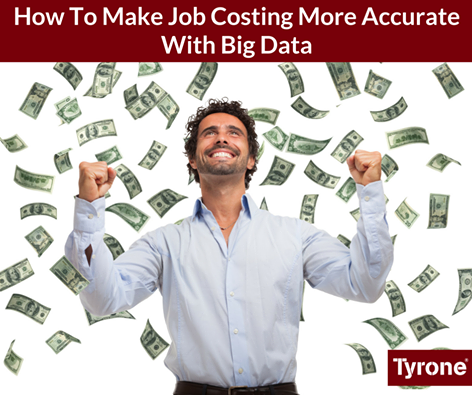 Big data plays a significant role in human resources where data aggregated from millions of data points from across the industry can be used to interpret and formulate work policies that are more attuned to what your employees want. There are a number of big data analytics reports published today that analyze the various metrics that businesses must change in order to stay ahead of their competition. But before we get to the part about employee policies, there is one area of human resources where big data is really useful and that is in the area of job costing.

Job costing is the process of tracking all the expenses incurred against a job role and bench-marking it against the revenues earned against it in order to measure the profitability of the role. It is a typically straight-forward accounting task for consulting, sales and marketing type roles where the expenses incurred and revenues earned against them are tangible. This is however not the case for departments considered “cost centers” like human resources, finance or even R&D.

Because of the complexity in determining the expenses and, more importantly, the revenues against cost center roles, job costing has traditionally not been used for such job roles. Instead, job costing has often been attempted at a holistic level across an organization with the help of total revenues and human resource overheads. This is however a vanity metric and does nothing to address the inefficiencies of specific job roles within a specific department in an organization. Does having a dedicated account manager for each client really improve customer satisfaction to such an extent that it enhances their life-cycle and thus revenues? As a business owner, it is difficult to answer such questions with a credible answer using the tools and models available at hand today.

However, with big data, it is now possible to look at millions of data points within an organization and across an industry vertical to identify the costs associated with a job role and subsequently measure the costs and revenues associated with it. Each business is unique and has a different composition of product managers, marketers, human resource managers and IT developers. But by aggregating all these millions of data points from across different companies and bench-marking them against revenues, it is possible to extract meaningful information about the profitability of specific work roles in an organization. Using big data, it is quite possible to answer really specific questions like whether having an accountant, as against using an online software alternative, is profitable. It is also possible to compare the overheads and revenues associated with these job roles to identify the number of positions to hire in order to make the role profitable for business.

This can have a terrific impact in the way various industries function. For instance, contractors in the Construction marketplace use data-driven job costing tools to not only measure the profitability of the various job roles, but can also identify roles that can be outsourced to cheaper economies without impacting the revenue equation. According to a research published by the Harvard Business Review, businesses that used data to benchmark job costing were five percent more productive and six percent more profitable than those that did not use such technology.

The challenge today however lies in the lack of credible data from across multiple industries that can be used in such big data analysis. This could change if large accounting and bookkeeping tools of today that is used by millions of businesses across the world could provide a way for users to aggregate anonymized data from different businesses to help extract meaningful job costing information to use. That’s a business opportunity waiting to be tapped.

Learn the Art of Data Science in Five Steps

Author adminPosted on August 24, 2018
The biggest evolution in the human universe could undergo in the extension of the present moment is if the universe itself is composed of...
Read More
Big Data
Author adminPosted on October 19, 2015
We in IT can sometimes be slow to recognize our power. For example, take cloud computing. We focused solely on aiding the business by...
Read More

Author adminPosted on June 7, 2016
Having immense potential, the hospitality sector is growing at a rapid pace both at the national and global level. As this sector expands in...
Read More

Author adminPosted on April 26, 2016
What do marketers and Big Data have in common? They both have an insatiable desire to know more about their targets. Big Data is that...
Read More